This is a blog about the great mind behind the Lender Combinations.

One of the most interesting combinations in chess composition is the one with reversed key.

The idea of reversing a key is simple: instead of moving a piece to attack or to cover a square, we can move it away from the square.

The novelty was introduced by the now famous Israeli chess composer Baruch Lender, (1913-1994). It was published in1979 as a two-mover showing, for the first time, a combination of exchanged key and threat with mates in both passes.

According to the definition this is actually the combination of themes: Reversal and le Grand.

Despite the originality of thematic paradox, his composition was not adequately rewarded in tourney, and therefore this new combination remained unnoticed for a while.

The only consolation for the inventor is if the invention becomes recognizable by his or her name as was the case with the “Reversal+le Grand” blend which is nowadays known as the Lender Combinations.

The recognition and the glory came many years later by many other chess problems.

The question posited: is it a Combination or a Paradox?

One answer was: Reverser Grand Contradiction. This blog points to - around the rare but amusing and fascinating series of moves that surprisingly looks like they shouldn't work.

Is the idea of exchanging the key in chess a combination or a paradox? In my opinion, it is an innovative combination. How did I reach this conclusion? A key's objective of duties is to defend a specific square. The key moves with the intent to attack and/or defend a receiver of threat from an enemy piece positioned on a particular square. If we move the key away from that original square leaving an exposed square, thus creating a threatening mate if we don’t

In the a publication (On the Threshold of a New Era in Chess Composition), we discovered that there are only 9 key-definitions.

We have shown that by combining these keys with different threats, it is possible to build many new types of combinations.   In fact, all of the chess combination themes are based on this idea. 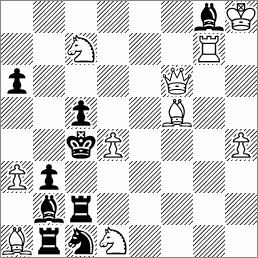 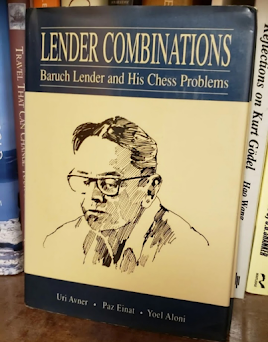 Posted by Mandy Lender at 5:54 AM No comments:

Intellectual School of Thought on Trump Books About Books on Trump

The first volume in this nascent school of intellectual studies was published in 2020.
On July 17, 2002, Donald J. Trump said:

Many books have been written about me, some good, some bad. Both happily and sadly, there will be more to come!

Over 4,500 books, so far, were published about former president Donald Trump, according to the British Guardian newspaper. Maybe…

The 45th president of the U. S. has taken authorship according to the New Statesman magazine, on 17 published books.

Better yet, in 2020 the journalist Carlos Lozada published a book in which he reviewed some of the book writing and book publishing industry - contents and business – over the personality, the life and doings of Donald Trump.

The book is titled, “What Were We Thinking: A Brief Intellectual History of the Trump Era.”*

The Guardian - is a Marxist leaning British paper - described Lozada’s book as, “…analyses 150 often trashy books about someone who is not known to have read a single book and hired stooges to write the 20 self-puffing volumes published in his name.”

That is after having been one term president.

Obviously The Guardian being what it is - dedicated to its ethos of downgrading Donald Trump - will be studied and discussed long after the retirement of the Guardians present and future Publishers and Editors-in-Chief.

There are no known plans for a Trump Presidential Library but it’s going to be a YUGE, BIG library building. It all depends on the future number of his presidential terms we will witness.

Carlos Lozada is a Pulitzer Prize winner, a book critic for the Washington Post and adjuct Professor of political journalism at the University of Notre Dame. 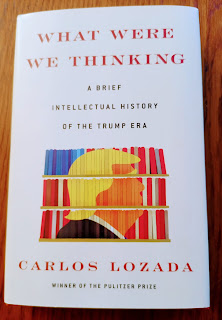 Biblioteca Trumpiana™ is our own trade mark.

Posted by Mandy Lender at 11:21 AM No comments: