Below is the Prayer of Jabez in a facsimile of the Gutenberg Bible (1455).

In the Gutenberg Bible the Prayer of Jabez is printed under the book titled in Latin:  Paralipomenon I .  The Facsimile was published by Brussel & Brussel, New York, 1968.  There are 4 original copies of the  Gutenberg Bibles preserved in New York: one is at the New York Public Library (incomplete copy) and the second site is in the Morgan Library and Museum in New York (one complete and two incomplete copies).
In common Biblical English editions the reference to the Prayer of Jabez is:
I Chronicles 2:9-10.   Verse 9 starts as the top line right word fuit . The last word of verse 10 ends at line 10 in the middle with the word est .  The photograph below is made from a facsimile owned by me.
The significance of the story is that Jabez attracted - enlarged his real estate holdings (dilataveris terminos) - by prayer only.
He did not buy it nor pay for it. 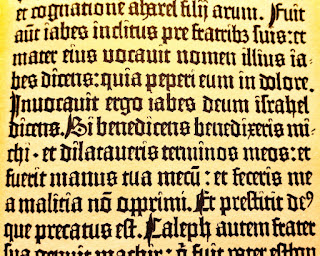